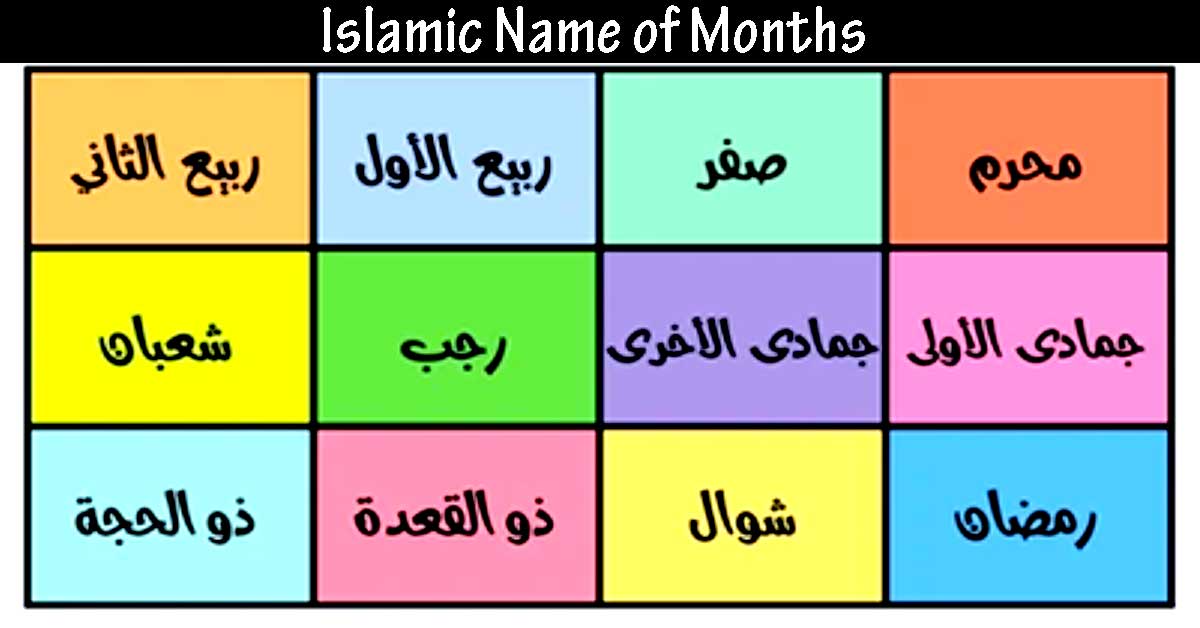 Assalamu Alaikum, Dear Brothers, and Sisters today I am going to tell you about the Islamic Name of Months and I will tell in detail with brief explanation. Insha Allah

Islamic Name of Months are Very important for Muslim Ummah. The Number of Islamic Months is 12 (twelve). Each month maybe 29 or 30 days. There are 355 days in lunar years.

The fact that the lunar year has approximately ten days less than the solar year, brings an Islamic anniversary ten days ahead each year in the solar calendar. For this reason, Islamic Festivals (Eid, Bakra Eid, Muharram, Miladun-Nabi, Asura, and Ramadan) held different weather.

Festival shots are sometimes on hot days, sometimes on winter days. but it happens on certain days of the Arabic Month. The Arabic month does not match in common with other Months.

Islamic Name of Months are twelve. you can memorize easily. Following are the names of the Islamic months.

Muharram: Meaning is Forbidden. Battles and all kinds of fighting are forbidden during this month. 1oth of Muharram is day of Asura. its valuable day in Islam.

Safar: That means Void. Stay away from Home, Arab houses were empty during this Month of year, at that time their occupants (resident) gathered food.

Rabiul-Awwal: Meaning is the first spring, Also means to graze because cattle were grazed during this month. The month in which the Holy Prophet Muhammad was born. It is a holy month of celebration for Muslims.

Rabi-us-Akhir: it’s also called Rabi-us-Thani. Meaning is the second spring or the end of spring. also, cattle were grazed during this month.

Jumadal-ula: The first parched Land, Also, meaning is “to freeze” water would freeze during this time of year.

Rajab: Meaning is respect and honor. also related to verb meaning is “to remove” so-called that, because, pre-Islamic Arabs, would remove the heads of spears and they abstain from fighting. Rajab is a Holy month because the Prophet Muhammad (ﷺ) got an invitation from Almighty Allah on 27 Rajab The Night of this month. one of the most miracle experiences that Almighty Allah bestowed upon Prophet Muhammad (ﷺ).

Shabaan: That means Dispersed. because at this time Arab tribes dispersed to find water. another meaning is “to be in between two things” (between Rajab & Ramadan).

Ramadan: Meaning is burning heat. Burning is related to fasting as on an empty stomach, one’s worldly desire will burn. Ramadan is a Holy and in Hijri. Muslim must fast from ore down till sunset. Muslim spend much money to Poor and needy.

Shawwal: Meaning is raised. Because camels would normally be in calf at this time n this month of the year and raise their tails.

Zul-qa’dah: That means truce. Because This is a holy month, war is banned. People are only allowed to defend themselves if anyone attacks.

Zul-Hijjah: Meaning is the pilgrimage (Hajj) Because in this month the Hajj is performed and Eid-ul Adha is celebrated on the 10th of Zul-hijjah. Zul-Hijjah is a Holy month, in this month also, war is banned.

Conclusion: I have mentioned in this Article Islamic Name of Months with brief explanation. I hope you like it. Please leave your feedback in the comment box.

1 thought on “Islamic Name of Months with brief explanation”